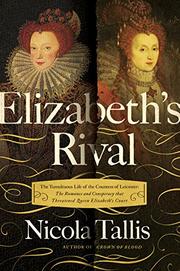 Just when you thought there was nothing new to learn about Elizabethan England, Tallis (Crown of Blood: The Deadly Inheritance of Lady Jane Grey, 2016) tells the compelling story of Lettice Knollys (1543-1634), who was close to the queen for years but eventually became her rival.

Lettice’s mother, Katherine, was most likely the illegitimate daughter of Mary Boleyn and Henry VIII and so half sister to Elizabeth, then Lettice’s aunt. Katherine and Elizabeth were raised together and were always very close. As queen, Elizabeth held Katherine and Lettice close to her at court. Both were favorites to the queen, but Lettice was not as wise as her mother and eventually married the queen’s suitor, Robert Dudley. That was after her first marriage to Walter Devereux, a marriage that was happy and produced a number of children. Dudley was the only one who really came close to talking Elizabeth into marriage, but it was never to be. After 20 years of waiting, he fell in love with Lettice, now widowed, and they married secretly. The author gives us a number of reasons why he would dare incur the queen’s wrath. Lettice offered marriage, heirs, and a stable domestic life, and they plunged ahead. It was a pleasant marriage, but Lettice seemed to throw her status up to the queen, infuriating her more. Dudley was eventually forgiven, but Lettice never was. For years, she sought forgiveness, hoping that her son might use his influence to bring it about. The fascinating connections between the great families of the period show what a small world it was; everyone was a cousin or spouse of someone connected to the queen. In her research, Tallis consulted many household records, correspondence, and a scandalous publication called Leicester’s Commonwealth, printed by Dudley’s enemies after his death. On the whole, the author provides an informative, well-crafted narrative and easily avoids the confusion of the nobility’s many titles.

Anyone who loves English royal history will enjoy this new take on a personality surprisingly little mentioned in the history books.