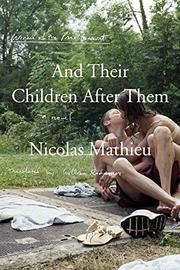 AND THEIR CHILDREN AFTER THEM

Winner of the Prix Goncourt in France, Mathieu's first novel to be translated into English follows three teenagers and their families through four summers in an economically depressed valley far removed from Paris.

It's 1992, “Smells Like Teen Spirit” is the song of the moment, and 14-year-old Anthony Casati is obsessed with the thought of topless girls. He and his cousin steal a canoe and paddle to the fabled nude beach across the local lake. His chance encounter there has far-reaching consequences for him, a wealthy girl named Stéphanie Chaussoy, and an immigrant boy named Hacine Bouali. Told in four sections, each unfolding over another summer, the novel details the torpor and hopelessness of a deindustrialized valley where children deal hashish and shoot their BB guns at the rusting carcasses of blast furnaces. Mathieu captures the vulnerability and awkwardness of adolescence with painful acuity as the teenagers struggle to find their ways in the world. But his interest extends further, to their families and the place itself; characters and setting are inextricable, as the book's best writing reveals. "In midafternoon, a diffuse numbness took hold of the projects....The towers themselves seemed ready to collapse, swaying in the waves of heat. Every so often, the howl of a tricked-out motorbike would slash through the silence....The boys felt sluggish and hateful." In the bar that Anthony's alcoholic father frequents: "People drank in silence until 5 o'clock, and more energetically afterward. Depending on their temperament, they then got sick, funny, or mean." The conflict between Anthony and Hacine has its roots in the valley's poverty and racism. In one of several vicious attacks, a punch "carried ancient pains and frustrations. It was a fist heavy with misery and missed chances, a ton of misspent living." Mathieu's sympathy for his characters is cleareyed and generous, and the final section—showing the entire valley caught up in World Cup soccer fever as the French team competes for a place in the finals—is surprisingly moving.

A gritty, expansive coming-of-age novel filled with sex and violence that manages to be tender, even wryly hopeful.

LORD OF THE SWALLOWS
by Gérard de Villiers
Mystery

THE MADMEN OF BENGHAZI
by Gérard de Villiers
Fiction

THE YELLOW EYES OF CROCODILES
by Katherine Pancol
Fiction

THE END OF EDDY
by Édouard Louis
Fiction