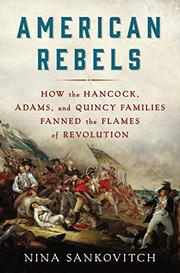 A look at the road to the American Revolution from the perspectives of five patriots.

On July 2, 1776, the Second Continental Congress, presided over by John Hancock, declared independence from Britain, prompting delegate John Adams to write to his wife, Abigail, that the “Second Day of July 1776, will be the most memorable Epocha, in the History of America.” This moment provides a fitting conclusion to this book, in which Sankovitch (The Lowells of Massachusetts: An American Family, 2017, etc.) argues that Hancock, the Adamses, Josiah Quincy Jr., and Dorothy Quincy Hancock together “led the fight for liberty” that culminated in the Revolution. John Hancock, John Adams, and Edmund and Samuel Quincy were childhood companions, the “Boys from Braintree” who attended Harvard together. In the years following the French and Indian War, Hancock, Adams, and Josiah often collaborated in response to British Colonial policies. Hancock and Quincy worked on an official protest against the Stamp Act, Adams was Hancock’s defense counsel in the Liberty case, and Hancock and Quincy helped organize the Boston Tea Party. Sankovitch persuasively claims the importance of the somewhat forgotten Josiah, a brilliant lawyer who succumbed to tuberculosis in April 1775 at the age of 31. She is less convincing in asserting the significance of Abigail Smith Adams and Dorothy Quincy Hancock. The author also commits too many factual errors: The Puritans were not separatists. Thomas Hutchinson was not the governor of the Province of Massachusetts Bay in August 1765. The committee charged with writing the Declaration of Independence consisted of five men, not six. John Adams was elected president in 1796, not 1797. Sankovitch also contradicts herself when she notes that Abigail Adams anticipated war with Britain (“inevitable, in her view”) after the Boston Tea Party only to write that she and others thought war was “still unthinkable” after that event.

An occasionally enlightening study hampered by the author’s missteps.

THE LOWELLS OF MASSACHUSETTS
by Nina Sankovitch
Nonfiction

TOLSTOY AND THE PURPLE CHAIR
by Nina Sankovitch
Newsletter sign-up