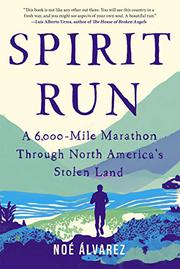 A swift-moving lope across the continent, courtesy of runner and debut memoirist Álvarez.

Born in Washington state to Mexican immigrants, the author faced a future of working in a fruit warehouse with his parents, “my dreams of ever leaving Yakima ending here.” He adds, “I learned that I was poor, monolingual, and from a struggling family living the sort of day-to-day life that had no clear end in sight.” Escape came in the form of an invitation to take part in a run, organized by Native American activists, that would follow a course from Alaska to Panama, where the runners would meet other runners who had come north from Tierra del Fuego, all stopping at Native American communities along the way. It was a six-month commitment to a hard project conceived by a group called Peace and Dignity Journeys, born as an offshoot of César Chávez’s United Farm Workers. With names like Pacquiao, Trigger, and Chula Pepper, the mostly 30-something people Álvarez ran with were diligent and hardworking, though there were the inevitable personality clashes (“ ‘Whatever you do, stay away from that guy,’ Cheeto warns me. ‘Dude’s not well,’ he writes of one loose cannon). Almost everyone had traveled a hard path through addiction, poverty, and alienation. For his part, the author harbored a deep well of doubt about whether he could pull off so formidable a challenge, especially when he fell down while nearing the Mexican border and resolved not to appear too injured so as to be allowed to continue. Running, he discovered, has a positive, spirit-affirming dimension that he, who had always associated running with running away from someone or something, had not known before, giving an immediate connection to the land—and allowing him a part in a significant journey even as “the world that we had put on pause was beginning to move again.”

A thoughtful first book that should inspire others to lace up their running shoes and get moving.