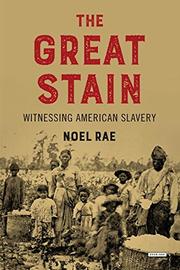 Eyewitness testimonies to the culture and commerce of slavery, America’s original sin.

Slavery was, in the words of a Southern circumlocution, a “peculiar institution.” In America, it was also an institution extending deep into the past, two centuries and more before the Civil War that ended it. In this gathering of personal, firsthand accounts, coupled with smart commentary, popular historian and editor Rae (People's War: Original Voices of the American Revolution, 2011, etc.) looks into that past. Near the beginning of the book is a tale by a slave trader in Africa who purchased captives from “a country called Tuffoe”—perhaps Togo—for “the value of twenty shillings sterling for every man, in cowries…and ten shillings for a woman, boy, or girl.” During the American Revolution, the British promised freedom to slaves only to return them to their masters in defeat given that the terms of surrender mandated that “any property obviously belonging to the inhabitants of these states…shall be subject to be reclaimed.” Within a couple of generations, by the account of a touring British journalist, the slave economy was at its apex. And it was extremely costly, tying up an enormous quantity of capital that would otherwise have gone into hiring labor and enriching the economy as a whole, by virtue of which “the whole country would have been advanced at least a century beyond its present condition.” That’s a fascinating premise, one of many that arise from this overstuffed book. It’s certainly a more fruitful one than the notion of the “lost cause,” which Rae traces to another journalist, a Southerner named Edward Pollard, who lamented the supremacy of the Northern cause and people, who were “coarse and inferior in comparison with the aristocracy and chivalry of the South.” Given the culture’s apparent need to readjudicate that conflict, this book and its wealth of documents and reports make a welcome, ready reference.

Essential for students of American slavery and antebellum history.