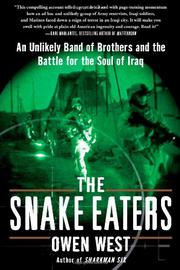 An Unlikely Band of Brothers and the Battle for the Soul of Iraq
by Owen West
BUY NOW FROM
AMAZON
BARNES & NOBLE
LOCAL BOOKSELLER
GET WEEKLY BOOK RECOMMENDATIONS:

Gripping, disturbing account of American advisors in Iraq, focused on several National Guardsmen and the Iraqi soldiers (jundis) they trained.

Besides being meticulously written, this book has an unusual pedigree: West, a novelist (Four Days to Veracruz, 2003, etc.), former Marine and son of renowned military writer Bing West, was recalled in 2006 to serve a second combat tour in Iraq, as an advisor in Khalidiya, a city beset by a brutal insurgency. West’s personal experience makes up the final third of the book, but the primary section focuses on the National Guard advisor team that he helped replace. Initially, their war resembled an unholy combination of Black Hawk Down and Catch-22. Unlike full-time soldiers, they were abruptly withdrawn from civilian life, given outdated training in counterinsurgency and sent to a posting outside the city to pair up with an Iraqi battalion, a move meant to showcase the Bush administration’s intent to “stand down” as Iraqi units “stood up.” West vividly captures the personalities of the advisor team, who quickly found themselves contending with frequent sniper and bomb attacks, culminating in the death of a well-liked U.S. corpsman. The author’s crisp writing makes more apparent the material waste and absurdity of America’s “small wars.” Despite the advisors’ bravery and good intentions, they were consistently undercut by supply problems and chain-of-command issues that inevitably gave the Guardsmen short shrift. West ably captures the drama in the initially tense relationships between the Americans and their beleaguered Iraqi counterparts, the remnants of Iraq’s professional officer class, and he’s sensitive to the nuances of Iraqi culture, which initially allowed al-Qaeda and other insurgents to fester in hardscrabble cities like Khalidiya. The author argues that the unit trained by the Guardsmen evolved into a determined and nonpartisan fighting force: “For a bunch of carpenters and cops, they were a pretty determined bunch.”

One of the better reflections on the war in Iraq, with enough sense of on-the-ground combat reality to hold disturbing portents for future “small wars.”