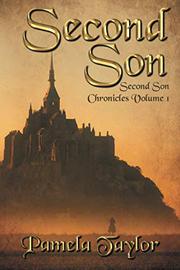 In this debut historical novel, a young lord is held captive and recalls pivotal moments in his life.

It is a time of peace, and Alfred is the king’s grandson. He’s also the second son of a second son, making him “twice removed from the advantages of inheritance.” And yet, the king adores Alfred for his interest in animals, kind disposition, and potential for greatness. Just over a year ago, he married Lady Gwendolyn from the northern Kingdom of the Lakes. A sharply curious girl, she’s interested in more “than just sewing and dancing,” making theirs a match based on intellectual and emotional compatibility. Her presence in his life makes up for John, Alfred’s loutish older brother, who cares only for drinking and stirring up trouble. Eventually, the king sends Alfred on a mission. He ventures west, toward the unorganized territories, to help his Uncle Harold build a dam. Alfred must also investigate the movements of the disgraced knight Ranulf and his villainous sons. But when the dam builders’ camp is attacked, Alfred is taken prisoner. His captor, a man named Ralf, is determined to earn a ransom by taking the king’s grandson farther and farther west. Even if he escapes, can Alfred traverse hostile country and survive? Taylor crafts a slender but detailed series opener that unfolds mainly through flashbacks. While captive, Alfred remembers the highlights of his teenage years, including sword practice; taming his colt, Star Dancer; and losing his virginity to a barmaid at John’s behest. Valuable lessons come from the king, such as, “Only when survival is assured can a man consider such things as improving his status in life” and “Only when he’s reasonably comfortable can he...consider greater contributions to society.” Perhaps most appealing to modern audiences is the king’s kindness toward Alfred. The monarch tells the young man he can refuse to marry Gwen if he feels no spark for her. Battlefield intrigue and the medical expertise of monks add pleasant intricacies to the narrative. The splendid finale closes the author’s introduction to her medieval world and provides good bones for the sequel.