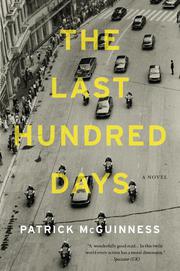 The final months of Ceaucescu’s dictatorship in Romania, as seen by a young British expat.

He’s a 21-year-old college dropout, yet he’s hired without an interview to lecture at Bucharest University, a first taste of how things work over there. The unnamed narrator is not sorry to be leaving. It’s 1989; cancer has just claimed his father, a hard-hearted man who mercilessly abused his mother, also dead. Waiting for him in a pleasant Bucharest apartment is another Brit, Leo, a faculty veteran who will be his mentor. Leo is “Bucharest’s biggest black-marketeer”; he needs a malleable front man, which explains why his young compatriot was hired. He’s an outsize character, not just a crook but a preservationist, cataloguing what’s left of the elegant inner-city neighborhoods before they disappear under the dictator’s bulldozers. Leo is man of contradictions, but not a convincing one, and a symbol of what’s wrong with the novel: its ruinous excess. McGuinness’ Romania is the standard picture of life under Ceaucescu: a sad, bleak place of fear (of the ubiquitous security goons) and deprivation (of life’s necessities). Instead of grounding Leo and his new sidekick (we never see them in the classroom), McGuinness spirits them into the heart of the dying regime’s power struggles. After a chance street encounter, the kid helps a wily old Party stalwart with his memoirs, while dating the coolest girl in town, who just happens to be the daughter of the deputy Interior Minister. There are wheels within wheels; nobody is who they seem. There’s a clandestine trip to the Yugoslavia border to help some dissidents escape, but it’s a moment without drama for the two lecturers, and it’s long after the fact that the now absent masterminds will be revealed as puppets of Party bosses. At the end, it’s not only the regime that falls apart, as the narrator dithers over whether to stay and confront his rumored nemesis.

THE LAND OF GREEN PLUMS
by Herta Müller
Fiction

KING OF THE GYPSIES
by Lenore Myka
Fiction