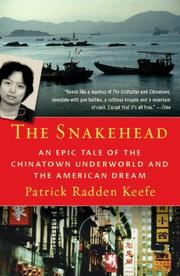 Expanding on his intriguing New Yorker article, Keefe (Chatter: Dispatches from the Secret World of Global Eavesdropping, 2005) tells the story of a multimillion-dollar smuggling ring that ferried illegal immigrants from China to New York City in the 1980s and early ’90s.

The ringleader, or “snakehead,” was a legal immigrant named Cheng Chui Ping, known to everyone in her Chinatown neighborhood as “Sister Ping.” Ping ran her operation, one of the largest and most sophisticated of its kind in the world, from a storefront on Chinatown’s Hester Street beginning in 1982. During the next decade, she raked in millions of dollars from poor Chinese desperate to get to America; each paid thousands of dollars to be smuggled in. Ping collaborated with the violent Chinatown gang Fuk Ching, an arrangement that would eventually lead to her downfall. On a June night in 1993, two Fuk Ching members were the victims of a revenge killing by a rival gang—the same day they were supposed to offload a ship of Chinese “customers.” With no one to meet it, the Golden Venture ran aground in Queens; ten people were killed, and many more were injured and arrested by police. In the wake of the tragedy, authorities tracked Ping, but it took years before she was finally captured in Hong Kong in 2000. Keefe ably navigates this extremely complex story, interviewing people at all levels, including law enforcement officials and—via written questions and answers—the imprisoned Sister Ping. Most effective are the author’s interviews with the illegal Chinese immigrants, who explain their willingness to pay a fortune—and risk their lives on a dangerous journey—just for the chance to reach America.