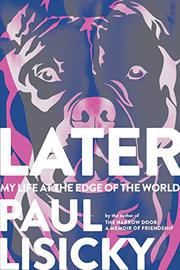 My Life at the Edge of the World
by Paul Lisicky
BUY NOW FROM
AMAZON
BARNES & NOBLE
LOCAL BOOKSELLER
GET WEEKLY BOOK RECOMMENDATIONS:

Lisicky (MFA Program/Rutgers Univ.-Camden), 60, returns to his early days as a young, gay man, which he previously wrote about in The Narrow Door (2016, etc.).

Throughout the author’s memoir, the focus is Provincetown, Massachusetts, in the early 1990s, when the author was awarded a residency fellowship at the Fine Arts Work Center and was looking forward to escaping dark and dispiriting times at home. It was October as he drove over the hill to view the small town nestled in the “curved coast of the harbor, shining.” Town, as he calls it, and his small room were his new home: “There’s no other place I’d rather be.” At the time, writes Lisicky, he felt he had been “dead too long,” and he was anxious to visit the catwalk that is Commercial Street. The first night, he picked up a tall, blond guy, and they had sex. Lisicky writes a great deal about sex in this memoir. “Sex for me is as essential as food,” he explains. This was the time of the AIDS epidemic, and the author cites a series of statistics that are still shocking nearly three decades later. In 1991, 20,454 people in the U.S. died of AIDS. By the mid-1990s, notes the author, 10% of Town’s gay population died. Written in short, titled sections, the memoir is brutally honest as Lisicky chronicles his search for companionship and love amid sadness, illness, and death. The next few years were a sexual roundelay as the author moved from lover to lover, with assorted affairs along the way. With each new issue of the Town’s Advocate, he turned to the obituaries: “Oh—that guy!...When he looked at me last week I looked back at him, and we were both citizens of Town.” Some readers may wish for more about literature and writing, but that is not the author’s focus here. Lisicky does a fine job capturing the emotional ambience of a special place consumed by both joy and fear.

A candid, scorching memoir that emits tenderness and sweet sorrow.