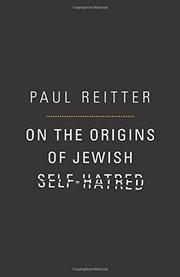 ON THE ORIGINS OF JEWISH SELF-HATRED

Reitter (Germanic Languages and Literatures/Ohio State Univ.; The Anti-Journalist: Karl Kraus and Jewish Self-Fashioning in Fin-de-Siècle Europe, 2008) traces the term “Jewish self-hatred” to the 1930s and explores the various meanings, positive and negative, it has acquired.

The author identifies two 20th-century writers—Anton Kuh and Theodor Lessing—whom he credits with coining, modifying and popularizing the term. Both men owed debts to Nietzsche. Lessing’s 1930 book, Jewish Self-Hatred, as the author writes, caused quite a reaction, and the term quickly spread throughout the writings of scholars and philosophers concerned with Jewish identity. It did not initially have entirely negative connotations; some took it to mean that Jews should despise the conditions that contributed to their situation and embark on a process of self-transformation. “Lessing forayed,” writes Reitter, “into the genre of self-help.” The author then shifts his focus to Kuh’s 1919 speech, “The Tragedy of the Jew,” which railed against the failures of assimilation. His later book, Jews and Germans (1921), argued that World War I had propelled anti-Semitism again into the foreground. In addition to exploring the term’s various meanings, Reitter sketches the careers of his two principals (Lessing was a feminist who also “irked Thomas Mann”; Kuh died in 1941 in New York while on his way to make a speech titled “How I Will Survive Hitler”) and makes an occasional effort to lasso general readers with some informal diction. But this is essentially a work for scholars, organized like an old-fashioned five-paragraph essay: introduction, three sections, conclusion.

Comprehensive research and scholarly diction will attract only a scholarly, but grateful, readership.

IF I AM NOT FOR MYSELF...
by Ruth R. Wisse
Nonfiction

THE POLITICS OF HATE
by John Weiss
Nonfiction