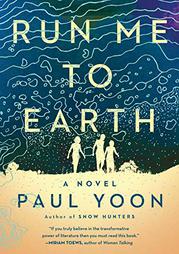 RUN ME TO EARTH

Three orphans struggle to survive the ruins of war-torn Laos.

In another life, Yoon (The Mountain, 2017, etc.) might have been a sculptor, carving the excess off his creations until they're perfect. In this decades-spanning examination of the survival of three orphans with the bad luck to have been born into the ruins of a battlefield, he's stretching his abilities while still writing with deliberate, almost vigilant care. The Author’s Note that opens the book notes that more than two million tons of bombs were dropped on Laos during the Vietnam War—with 30% failing to explode on impact. The book’s viewpoint, beginning in 1969, comes from three teenage orphans living in a bombed-out hospital: Alisak, who dreams of fleeing to France; his dear friend Prany; and Prany's younger sister, Noi, all bonded by caring for each other because there’s no one else to do it save for Vang, a drunken doctor who does his best. The language is as elegant and understated as always, but Yoon has chosen to fracture his narrative, often by decades. In 1970, Prany and the doctor are imprisoned for political reasons, meaning mostly no reason at all, and seven years later they're released into a world they don’t recognize. Noi has a dark encounter back in 1969 before the novel leaps forward again to 1994, when Khit, another member of Alisak’s motley crew, finally makes it to Paris. The story ends with a moving remembrance from Alisak in 2018, so far away from his bombed-out homeland, thinking of three children huddled around a fire. The story of the friends' wartime tragedy echoes that of children caught in dire circumstances around the globe, but Yoon’s imaginative prose and affection for his characters make the story larger than a look at the ways people survive. We see a bunch of kids working together to make it out alive, and then Yoon's time jumps show that life goes on after survival and that there's meaning there, too. The characters get what we all get in the end, if we're lucky: a life, with all the joys and heartbreak that come with that.

Another masterpiece in miniature about the unpredictable directions a life can take.

THE MOUNTAIN
by Paul Yoon
Fiction