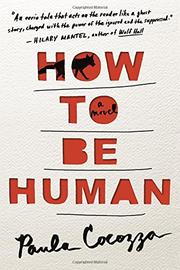 HOW TO BE HUMAN

A debut novel from Guardian feature writer Cocozza, this disquieting story details the obsessive romance between a woman and a fox.

Mary is newly single, in danger of losing her job, indifferent to housekeeping, and bedeviled by the yuppie neighbors whose baby she can hear crying through the walls. Her life seems at the verge of implosion until she spots a fox snoozing in her garden. What follows is a scintillating descent through one woman’s mental collapse; or, as is equally possible in this absorbing novel of tricky perspective, her salvation. On first introduction, Mary responds to Fox with a wary sort of proprietariness. She thinks of her gaze as “a kind of cage, throwing down bars to the lawn to keep him trapped.” As the novel progresses, however, these barriers are rapidly erased, and their relationship develops from mutual admiration to co-habitation over the course of one balmy East London summer. As the tensions in Mary’s outside life mount—her domineering ex-fiance, Mark, comes back into the picture; her neighbor Michelle’s postpartum depression takes a dangerous turn; Flora, Michelle’s baby, shows up one night on the doorstep, brought, perhaps, by the fox—the intimacy of her observations, the precision of her descriptive eye, and the intensity of her romantic obsession with Fox build to a crescendo. Told partially from Mary’s standpoint and partially from the truly foxy point of view of Fox, Cocozza's story balances on the pinpoint of perspective. Is Mary mad or simply living her life more fully than her compatriots? Is Fox the anthropomorphic dream partner Mary perceives, or is he a wild animal, motivated solely by his own instinct to survive?

A singular love story of dominance and betrayal, this novel sets the tone for what will hopefully be a long and strange literary career.

GETTING A LIFE
by Helen Simpson
Fiction