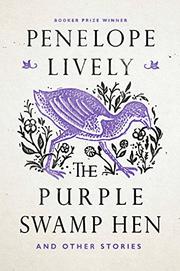 THE PURPLE SWAMP HEN AND OTHER STORIES

How well do we ever know another person? That’s the leitmotif of this witty but piercing new collection by Man Booker winner Lively (Dancing Fish and Ammonites, 2014, etc.).

The title story sets the tone: narrated by an exotic pet in Roman Pompeii, shortly to be eradicated by the C.E. 79 eruption of Vesuvius, it shows genuine communication only between the purple swamp hen and a slave girl in an aristocratic household otherwise roiled by people who can’t get along and communicate (angrily) only in a crisis. The collection’s keystone, “A Biography,” couples interviews conducted for a book about Lavinia Talbot, a charismatic public intellectual, with the interviewees’ private, unshared recollections to create a poignant portrait of a woman with a secret wound at the heart of her life’s work and to simultaneously suggest that we can never fully understand her. “Lorna and Tom” also painfully demonstrates the possibility of loving someone without ever really grasping his or her essence, giving a quietly wrenching account of a marriage that ultimately founders on the shoals of Britain’s terminal class-consciousness—though not, because Lively rarely does the expected, in the way readers might anticipate. Yet there are also radiant stories like “Point of View,” in which a screenwriter and her live-in boyfriend, each yearning for a child and convinced the other doesn’t want one, finally stumble into mutual accord. “The Bridge” is perhaps the collection’s best showcase of Lively’s gift for embracing the full range of human complexity. “How can something have happened twice over? One way for him, another for me?” asks a woman about a family tragedy she and her husband literally saw differently. Yet the story’s conclusion shows the characters groping to surmount their limited perspectives, prodded by love. A droll update of Pride and Prejudice and a couple of satisfyingly scary ghost stories provide some lighter entertainment, and even in her darkest tales, Lively’s fundamentally serious take on our tangled emotional lives is never bleak, merely ruefully accepting.

A treasure trove of fictional gems.

LIFE IN THE GARDEN
by Penelope Lively
Nonfiction

MAKING IT UP
by Penelope Lively
Fiction

THE PHOTOGRAPH
by Penelope Lively

THE ASSASSINATION OF MARGARET THATCHER
by Hilary Mantel
Fiction