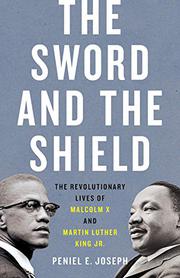 THE SWORD AND THE SHIELD

A revisionist study of the parallel lives of two of America’s most significant African American leaders.

Joseph (Political Values and History/Univ. of Texas; Stokely: A Life, 2014, etc.), who has written widely on African American history, punctures the widespread myth that Martin Luther King Jr. and Malcolm X espoused diametrically opposed philosophies about ameliorating racism in the United States. “A mythology surrounds the legacies of Martin and Malcolm,” writes the author. “King is most comfortably portrayed as the nonviolent insider, while Malcolm is characterized as a by-any-means-necessary political renegade.” On the contrary, Joseph shows that although the two crusaders often disagreed about tactics, they began to appreciate each other as tacticians during the 1960s, as the civil rights movement began to gain traction during the presidencies of John F. Kennedy and Lyndon B. Johnson, and simultaneously grew increasingly violent at the local level. Because readers know that each man would eventually suffer an early, violent death, the narrative takes on a poignant urgency as the chapters unfold. While Malcolm was shot and killed in a public auditorium by assassins from the Nation of Islam, an organization led by self-proclaimed prophet Elijah Muhammad but effectively expanded by Malcolm before he split from the prophet, King was killed by a hatemongering white supremacist. Before chronicling the murders, Joseph sets the stage with solid biographical sections about the upbringings of both men. Malcolm grew up in a dysfunctional Midwestern family that fractured quickly, and he grew into a sometimes-violent teenage criminal who served nearly a decade in prison, where he became an autodidact. King grew up in a Southern family that had become part of the black elite, and unlike Malcolm, he received a doctorate and graduated from a respected theological seminary. As the author delineates the philosophies and tactics of each man, he compares and contrasts them on nearly every page, making the various narrative strands cohere nicely.

An authoritative dual biography from a leading scholar of African American history.