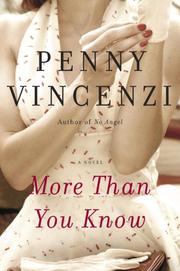 MORE THAN YOU KNOW

Vincenzi’s latest investigation of British class unrest (Another Woman, 2012, etc.) begins with a country house. Entailed by a family trust, Summercourt cannot be sold by its owners, impoverished aristocrats Sarah and Adrian Fullerton-Clark. Son and heir Charles, a fledgling stockbroker, is in no position to help financially. With no repair budget, Summercourt is sliding into ruin. Sarah and Adrian pin their hopes on daughter Eliza’s marriage prospects—Jeremy, an ad exec worth a fortune, is smitten with her. Eliza, editor of a trendy style mag, finds her job all-absorbing as London fashion captivates the world, and bland Jeremy bores her. But she experiences immediate sexual frisson with Charles’ former army buddy Matt, a self-starting real-estate entrepreneur. An unplanned pregnancy forces the issue and the two are wed, much to Sarah’s chagrin over the groom’s working-class antecedents. Matt’s sister Scarlett, an airline hostess, has her own romantic troubles. Her lover, a married American, David, claims he’s about to divorce, but now his wife, Gaby, is pregnant. Scarlett, outraged because she had to abort her child by David, blackmails him into giving her seed money to start a travel business. While in Greece scouting a small hotel, she meets Mark Frost, a painfully shy travel writer with very appealing grey eyes. Eliza is chafing at the restrictions imposed on her by marriage and motherhood—Matt insists that she give up her job just as Twiggy and Carnaby Street are revolutionizing everything. Charles’ marriage to middle class upstart Juliet has proven disastrous—she’s spending all the money she erroneously (based on Summercourt) married him for, and he’s reduced to borrowing from her father. A few more developments, and the stage is set for the tamped-down hysteria that Vincenzi finesses so well.

An intriguing glimpse at British life at the outset of the turbulent 1960s.

A QUESTION OF TRUST
by Penny Vincenzi
Fiction

ANOTHER WOMAN
by Penny Vincenzi
Fiction

ALMOST A CRIME
by Penny Vincenzi

KING OF THE CITY
by Michael Moorcock
Fiction

AUTOBIOGRAPHY OF US
by Aria Beth Sloss
Fiction

AN EXPERIMENT IN LOVE
by Hilary Mantel
Fiction

ONLY TIME WILL TELL
by Jeffrey Archer
Newsletter sign-up