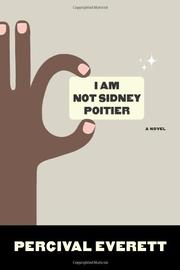 I AM NOT SIDNEY POITIER

Everett (The Water Cure, 2007, etc.) returns with what might be considered a wacky slapstick.

His allegory about race, class and celebrity takes a turn toward the silly, as the protagonist’s name—literally, “Not Sidney Poitier”— inspires all sorts of Abbott and Costello “Who’s on First?” riffing. (“Knot, with a k?”...“Not with a k”…“That’s what I said”… “N-O-T”…“Sidney?”… “Not my name is not Sidney. My name is Not Sidney.”) Not Sidney is an orphan, born to a crazy woman following a 24-month pregnancy. Yet his late mother was wiser than most of the other characters the young innocent will encounter in his wildly absurd travels across the American South. At least she had the good sense to invest early and often in the Turner Broadcasting System, leaving her son so rich he does not know the extent of his fortune. Since Not Sidney never knew his father, the two formative figures in his life are Ted Turner, who takes him in after his mother’s death, and Percival Everett, a buffoon of a professor who spouts nonsense as higher sense. (The standard disclaimer, that “this novel is NOT in any way a depiction of anyone living, dead or imagined by anyone other than the author,” is followed by a rather more unusual corollary: “This qualification applies, equally, to the character whose name is the same as the author’s.”) Turner and Everett rescue Not Sidney when he, like Huck Finn, attempts to light out for the territory and lands in the racist backwoods of Peckerwood County and Smuteye, Ala. Yet Not Sidney encounters racism in subtler ways, such as when a prospective girlfriend’s parents dismiss him as too dark until the extent of his fortune reveals him to be plenty light enough.

The author had some fun; the reader will too.

SO MUCH BLUE
by Percival Everett
Fiction

HALF AN INCH OF WATER
by Percival Everett
Fiction