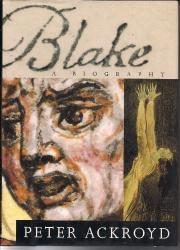  Ackroyd's biography of William Blake represents an achievement of composite method fully in the poet's own spirit--it's a work so sensitive to its subject, it seems to have conjured him from the beyond. Scholar, workaday artisan, mystic, and social critic, Blake (17571827) excelled at poetry, engraving, and painting. Yet rather than spread his multifacteed genius through diverse pursuits, Blake concentrated it into his homemade books--famous now, but noted in his day only as oddities. For these sui generis productions, Blake printed pages where script and illustration flow side by side: now commenting on this world, now offering visions of others. Novelist and biographer Ackroyd (The Trial of Elizabeth Cree, 1995; Dickens, 1991; etc.) again shows himself to be an adept literary critic and historian: His explications of many of Blake's works, from widely known lyrics like ``The Tyger'' to hermetic epics like ``The Four Zoas,'' unfold into detailed panoramas of England as Blake knew it. He captures the difficulties that the radical Blake faced in squaring his art training at the prestigious Royal Academy with his humble artisanal background. The blunt, ``gothic,'' outline forms of Raphael and DÅrer, out of fashion at the time, provided Blake with an alternative tradition with which to affiliate himself; such contemporaries as John Flaxman and Henry Fuseli provided moral support. Above all, Ackroyd stresses Blake's intimate relation to his London environs and to the crises of war and industrialization that beset Britain during his life. While he argues that Blake was often caught up in hallucinatory waking visions, Ackroyd weighs against any diagnosis of mental illness the justice of Blake's claim that he was gifted to see through and beyond the insane upheavals of his times. Not the least part of Ackroyd's accomplishment is to have limited himself to 416 pages--enough, and (to paraphrase Blake), assuredly not too much. (16 pages b&w illustrations, 24 pages color illustrations, 73 text illustrations, not seen) (Book-of-the-Month Club selection)

Pearl of the Seas
by Ruth Finnegan
Nonfiction