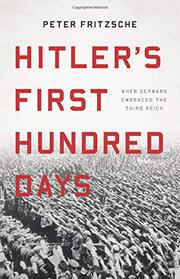 Hitler had little trouble destroying German democracy, and this fine history describes how he did it.

Fritzsche (History/Univ. of Illinois; An Iron Wind: Europe Under Hitler, 2016, etc.) emphasizes that Germany was a divided, turbulent nation when Hitler became chancellor on Jan. 30, 1933. The Nazis were Germany’s largest party, but a series of elections in 1932 showed no groundswell in its favor, and most establishment leaders considered Hitler a loose cannon. President Paul von Hindenburg refused to appoint him chancellor, and Hitler refused to serve under anyone else. It was only when influential conservatives assured Hindenburg that they could control Hitler from subordinate positions in the cabinet that he changed his mind. Even readers who know what followed will not put down Fritzsche’s gruesomely fascinating account, as he chronicles how Hitler persuaded Hindenburg to schedule another election and then launched a fierce campaign, using government powers and his own paramilitaries to suppress opposition. The result was not a landslide, but the Nazis and their minor partners controlled just above 50% of the Reichstag. Proclaiming that the nation faced massive communist terrorism, Hitler urged officials to pass an enabling act, giving him dictatorial powers. To achieve the necessary two-thirds vote, he arrested the communist delegates, but in the end, it passed overwhelmingly. By May 9, the 100th day, Nazis had seized the governments of the federal states, dismantled trade unions, passed the first anti-Semitic laws, and destroyed all opposing political parties. Dachau and other new concentration camps quickly filled. In the final chapters, Fritzsche describes Germany over that summer and fall as mass arrests and violence dwindled. In return for enthusiastic devotion, Hitler assured citizens that they were the salt of the earth, that he would crush a despicable elite responsible for their miseries, and that sneering foreigners would realize that Germany was a great nation again. Most Germans found this appealing, and it remains a crowd-pleaser for power-hungry politicians around the world.