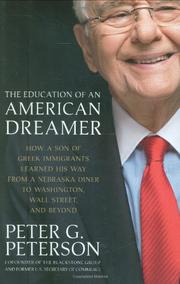 THE EDUCATION OF AN AMERICAN DREAMER

How a Son of Greek Immigrants Learned His Way from a Nebraska Diner to Washington, Wall Street, and Beyond
by Peter G. Peterson
BUY NOW FROM
AMAZON
BARNES & NOBLE
LOCAL BOOKSELLER
GET WEEKLY BOOK RECOMMENDATIONS:

Sagacious octogenarian and genial plutocrat Peterson (Running on Empty: How the Democratic and Republican Parties Are Bankrupting Our Future and What Americans Can Do About It, 2004, etc.) recalls his journey from Kearney, Neb., to the White House and Wall Street.

During the Depression, the author, then a young scion of hardworking Greek immigrants, tended the cash register in the family restaurant. Soon the bright lad was off to MIT and then to Northwestern’s business school. As a young go-getter in a gray flannel suit, he found a natural place in advertising with a prominent Chicago agency. He quickly moved into management at Bell and Howell, where he created the boombox. An open-minded Republican, he entered the world stage as Nixon’s adviser on international trade policy and then secretary of commerce in the early ’70s. He became a member of corporate boards, study groups and think tanks. Then Wall Street beckoned, and Peterson took charge of Lehman Brothers. He later co-founded the Blackstone Group, leaving it as a billionaire. His life story epitomizes the American Dream, as our earnest autobiographer tells it, and no wonder, since he freely confesses to “troublesome traits” like “perfectionism and obsessive devotion to work.” Of course, Peterson’s life wasn’t entirely unproblematic, fraught as it was with brain surgery, two divorces and Richard Nixon. He covers all of these, offering frank appreciation of friends (like Henry Kissinger and David Rockefeller) and candid assessment of foes (Chuck Colson). The author remains devoted to family—he’s now married to Joan Ganz Cooney, who helped create Sesame Street—and to public service.

Disingenuous candor is not unknown in works like this, but Peterson’s memoir is persuasive and lucid.

WILL AMERICA GROW UP BEFORE IT GROWS OLD?
by Peter G. Peterson