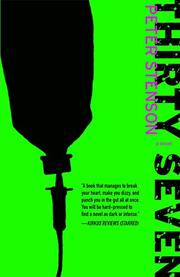 The lone survivor of a cult tries to readjust to life as an average citizen, but when he meets a girl whose quest for honesty and happiness reminds him of his younger self, his future begins to look like his past.

Mason Hues’ life has been one horrible situation after the next. His adopted father’s predatory behavior propelled Mason to run away from home to join The Survivors, a cult whose members inject the drug Cytoxin—commonly used in chemotherapy treatments—which sickens them to the point of immobility. The closer the cult members get to death, they say, the more they gain a new appreciation for life, an appreciation which evolves into a longing to spread their “teachings” to others and culminates in a mass murder-suicide called the Day of Gifts. After surviving the Day of Gifts, Mason spends time in a juvenile penitentiary and a psychiatric ward, then rejoins society and meets Talley, with whom he forms a relationship that soon begins to follow the same downward spiral as Mason’s life with The Survivors. With his second novel, Stenson (Fiend, 2013) proves to be a more articulate, more empathic, and more intelligent version of Chuck Palahniuk. Stenson’s sentences devastate, and his characters are nuanced and warm, which makes the terrible things that happen to them and the terrible choices they make more painful to read about. Stenson’s cutting descriptions of drug use, violence, and nihilistic despair suffocate the reader like a noose. Here's his description of "the American Dream," for example: “Every conversation is one-sided, a mirror reflecting looks and status and wealth. Every person is steeped in want…filling themselves with goods and sex and alcohol and validation so they forget about the fact that they all will die.” Themes of immortality, sacrifice, self-hatred, and the artificiality of modern life feel new in Stenson’s world, a world teeming with prophetic visions, existential provocations, and ideological assertions that will leave readers questioning the way they lead their lives.

A book that manages to break your heart, make you dizzy, and punch you in the gut all at once. You will be hard-pressed to find a novel as dark or intense in any bookstore.