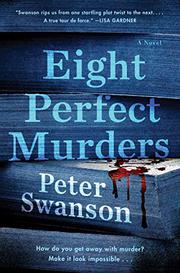 A ghoulish killer brings a Boston bookseller’s list of perfect fictional murders to life—that is, to repeated, emphatic death.

The Red House Mystery, Malice Aforethought, The A.B.C. Murders, Double Indemnity, Strangers on a Train, The Drowner, Deathtrap, The Secret History: They may not be the best mysteries, reflects Malcolm Kershaw, but they feature the most undetectable murders, as he wrote on a little-read blog post when he was first hired at Old Devils Bookstore. Now that he owns the store with mostly silent partner Brian Murray, a semifamous mystery writer, that post has come back to haunt him. FBI agent Gwen Mulvey has observed at least three unsolved murders, maybe more, that seem to take their cues from the stories on Mal’s list. What does he think about possible links among them? she wonders. The most interesting thing he thinks is something he’s not going to share with her: He’s hiding a secret that would tie him even more closely to that list than she imagines. And while Mal is fretting about what he can do to help stop the violence without tipping his own hand, the killer, clearly untrammeled by any such scruples, continues down the list of fictional blueprints for perfect murders. Swanson (Before She Knew Him, 2019, etc.) jumps the shark early from genre thrills to metafictional puzzles, but despite a triple helping of cleverness that might seem like a fatal overdose, the pleasures of following, and trying to anticipate, a narrator who’s constantly second- and third-guessing himself and everyone around him are authentic and intense. If the final revelations are anticlimactic, that’s only because you wish the mounting complications, like a magician’s showiest routine, could go on forever.

The perfect gift for well-read mystery mavens who complain that they don’t write them like they used to.

BEFORE SHE KNEW HIM
by Peter Swanson
Fiction

ALL THE BEAUTIFUL LIES
by Peter Swanson
Fiction

HER EVERY FEAR
by Peter Swanson
Fiction

THE KIND WORTH KILLING
by Peter Swanson
Fiction