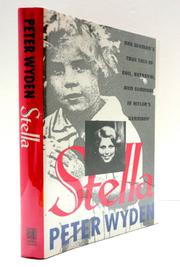 One Woman's True Tale of Evil, Betrayal, and Survival in the Holocaust
by Peter Wyden
BUY NOW FROM
AMAZON
BARNES & NOBLE
GET WEEKLY BOOK RECOMMENDATIONS:

 A chilling exploration of the moral complexities of survival in an insane world distinguishes this unusual and deeply disturbing Holocaust tale. Far from the stereotypical Nazi collaborator, Stella Goldschlag--blond, beautiful, and Jewish--first met Wyden (Wall, 1989, etc.) as a classmate (and pubescent fantasy figure) in 1930's Berlin. But while Wyden and his family managed to escape Germany in 1937, Stella remained trapped. After enduring forced factory labor, a precarious few months as a ``U-boat'' (an illegally subsisting Jew), and two rounds of Gestapo torture (punctuated by two escapes), she became a greifer (catcher), one of the desperate Jews who hoped--generally unsuccessfully--to save themselves and their families by helping to apprehend others. Relying on a wide-ranging mix of personal recollection, extensive interviews (including talks with Stella herself), psychological commentary, and published records, Wyden sketches a hypnotic portrait of his subject's world against its larger political context: the progressive loss of civil liberties; street violence; sudden deportations; suicides; concentration camps; daring escapes; refugee struggles; and disbelieving inaction by outside powers. At the ethically troubling center is Stella, responsible for as many as 2,300 deaths, stalking her prey at cafÇs, movies, the opera, resorts, and even funerals- -and, after three trials and ten years in Soviet labor camps, remarkable unrepentant. Hiding neither his horror nor his sense of connection, Wyden goes beyond the dismal facts to probe the limits of culpability when faced with ``the final choice: to die or join the devil.'' While this ultimately makes the book more intellectually than emotionally challenging, it heightens the universality of its theme--not nobility vs. evil, but the tragedy of ordinary people in a hopeless situation. A provocative and haunting work, worthy of the attention--and soul-searching--of a wide readership. (Sixteen pages of b&w photographs--not seen.)