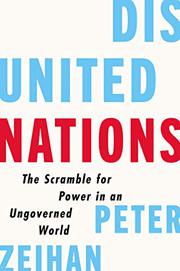 The Scramble for Power in an Ungoverned World
by Peter Zeihan
BUY NOW FROM
AMAZON
BARNES & NOBLE
LOCAL BOOKSELLER
GET WEEKLY BOOK RECOMMENDATIONS:

Geopolitical strategist Zeihan (The Absent Superpower: The Shale Revolution and a World Without America, 2017, etc.) delivers his latest unsettling prognostication.

The author begins after World War II, when the U.S. reigned supreme. Ramping up anti-communism efforts, the U.S. led an alliance of nations that were either like-minded or happy to go along in exchange for protection and aid. Protection took the form of a nuclear standoff, which produced a remarkably war-free era, and for the first time in history, the Navy freed sea lanes for unfettered worldwide trade. The result was an explosion of prosperity that continued until recently. In his earlier book, The Accidental Superpower (2014), Zeihan concluded that “2020 would look a lot like 1950, albeit without the whole fear-of-nuclear-war-thing.” He has changed his mind. No alliance lasts without a common threat, he admits, and this disappeared with the collapse of the Soviet Union. At the time, George H.W. Bush (the last president the author admired) launched a national conversation on what might come next. “So of course the Americans voted him out of office….Bill Clinton found foreign policy boring and did his best to avoid it,” writes Zeihan. No Bush successor has provided “the necessary guidance to American military, intelligence, and diplomatic staff as to what America’s goals actually are.” Consequently, nations are beginning to look after their own interests. As a result, writes the author, the U.S. will turn inward, and post-Brexit Britain will shrink to a U.S. client state. Russia’s demographic collapse is well under way. Zeihan’s more controversial projections will keep readers squirming, usually with pleasure, at his expert, often cynical insights. France, self-contained and with a far more “expeditionary-themed military,” will dominate a declining Germany. Absent U.S. love of its oil, Saudi Arabia (essentially a gangster state) will duke it out with Iran unless an expansive Turkey becomes the dominant local power. Hypertechnology will return Japan to preeminence in Asia when China’s unsustainable bubble economy collapses.