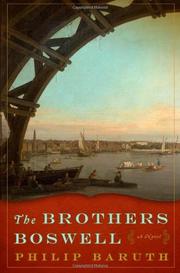 Samuel Johnson and his biographer find themselves at the mercy of Boswell’s mad younger brother in a literary conceit from Baruth (The X President, 2003).

They’re an odd couple, the London literary lion and the Scottish acolyte more than 30 years his junior, yet they’re already fast friends just two months after their first meeting. On a summer day in 1763, they have planned an excursion down the Thames, unaware they are being shadowed by James Boswell’s 19-year-old brother John. He has been tracking his brother since dawn; he watched James flirting with two whores in the park, then followed him to a house where James made love to Peggy, a Scottish skivvy. When John bursts in on Peggy after his brother’s departure, brandishing pistols and vowing to kill her if she sees James again, we realize he is, as he tells Peggy, “genuinely mad.” Indeed, he had been confined in an asylum only months earlier. Arriving in London, he has discovered James’s journal. The realization that his brother has been excluding him from his social circle enrages John; he has planned this July 30 as a day of reckoning when, armed and dangerous, he will confront and expose James and Johnson simultaneously. (John has an animus against Johnson too, because he’s persuaded himself that the writer is his clandestine platonic lover.) Baruth interrupts his story of the big day with flashbacks to the Boswells’ Edinburgh childhood and James’ social climbing in London, combining John’s unreliable first-person narration with James’ point-of-view. The story only works if we find John as worthy of interest as his famous targets; sadly, we don’t. Madness is not inherently fascinating, and John’s asylum experience is barely touched on. Baruth does manage to whip up suspense around the eventual showdown at a coffeehouse; elsewhere our enjoyment derives from the story of James Boswell’s ascent, buttressed by delightful period detail.

Elegant prose and an occasional frisson mask, for a while, the ultimate pointlessness of this tall tale.