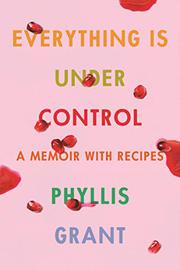 EVERYTHING IS UNDER CONTROL

A chef and food writer debuts with a lean memoir that revisits seminal moments from her past through tightly composed vignettes.

Beginning with her arrival in New York City from the West Coast as a young dance student at Juilliard, we follow Grant’s struggles with demanding instructors and insecurities about her weight as well as attempts to establish her identity in the city. Parallel moments reflect on her mother’s and grandmother’s lives. Under their influence, Grant acquired an appreciation for cooking and good food, which inspired her shift from dancing to becoming a self-trained professional chef. She cooked her way through notable cookbooks such as Julia Child’s The Way To Cook and volunteered at a French bakery, eventually landing in the kitchens of top-notch restaurants in the city. Grant is particularly adept at packing a lot of emotion and detail into a few brief lines, as in her summary of her early apprenticeship: “Six months in and I have experienced the obscenely long hours and witnessed the fire hazards, rampant drug use, and misogynistic everything. I have also learned that I am allergic to flour when it’s in the air, which is constant in the pastry room. I sneeze a lot. I still want this more than ever.” Following 9/11, the newly married author moved back to the West Coast. In rapid succession, we follow her through two difficult pregnancies and excruciating childbirths as well as post-partum depression. However, by the end, we’ve gleaned little about the important individuals in her life. Her husband, actor/director Matt Ross, is referenced only as “M,” present throughout but peripheral to her story. In the last section, Grant offers a selection of favorite recipes, weaving in personal memories and confident advice and further confirming her talent as a food writer. Ultimately, her memoir, composed of brief paragraphs and chapters within ample white space, serves to showcase her writing style and inventive skills in the kitchen. While she fearlessly lays bare many of her personal experiences, the end result feels somewhat insubstantial.