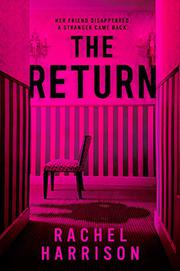 Julie’s husband, Tristan, and her best friends, Elise, Mae, and Molly, were devastated when she didn’t return home from her trip. After a year, a funeral was held with no body. Everyone close to Julie was certain she was dead except for Elise, and on the two-year anniversary of her vanishing, Julie proves Elise right. Tristan finds her sitting on their porch swing with no memory of the time she was gone. With so many questions surrounding Julie’s return, Elise is surprised when Mae arranges a girls' trip to the Catskills' eclectic (themed rooms!) Red Honey Inn over Columbus Day weekend. Julie is the last to arrive, and her emaciated appearance is jarring. She’s not the vibrant woman Elise remembers, but she’s undeniably her beloved friend, and the four look forward to a fun reunion. The weather is frightful, though; Elise’s room is frigid; and Julie is acting very oddly, to say the least. Julie was a vegetarian, but now she has a ravenous hunger for rare meat and smells like an abattoir. Then there’s the shadowy figure Elise keeps glimpsing in her room. Harrison skillfully portrays the bond between the four longtime friends, complete with secrets and tension, but always against a background of palpable affection. As Elise, who narrates, says, “I’m so happy to be with them and to be the version of myself I am when I’m around them.” Unfortunately, though, it's increasingly obvious to Elise, Mae, and Molly that they need to get to the bottom of what’s happening to Julie, who is deteriorating before their eyes. Harrison successfully sustains a low, visceral dread throughout that eventually builds to a shocking crescendo, and whispers of The Shining haunt the Red Honey Inn’s gloriously gaudy halls. Patient readers who appreciate a slow burn with an explosive payoff will be rewarded. This girls’ trip has teeth.

A stylish and well-crafted horror debut.