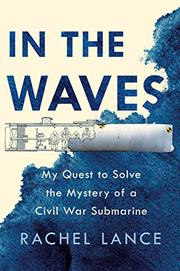 My Quest To Solve the Mystery of a Civil War Submarine
by Rachel Lance
BUY NOW FROM
AMAZON
BARNES & NOBLE
LOCAL BOOKSELLER
GET WEEKLY BOOK RECOMMENDATIONS:

Surprising new facts about the first submarine to destroy an enemy ship.

The culmination of years of development by Confederate designers led by marine engineer Horace Lawson Hunley, the Hunley killed two crew teams during testing (Hunley was among those killed) and a third on February 17, 1864, when it sank a Union blockader in Charleston Harbor with a bomb at the end of a 20-foot pole. Ironically, since submerging had proved a death sentence, the submarine traveled on the surface during its successful attack. This dramatic feat gained it mythical status, and great excitement followed the exhumation of the wreck in 2000. An engineer working for the Navy, Lance was studying at Duke University for a doctorate in biomedical engineering, and her thesis research concerned the effect of underwater explosions on humans. Most occurred during World War II, so these occupied her until a thesis advisor suggested that she give thought to the Hunley. She complied and turned up an intriguing puzzle, which she delivers to readers. When recovered, the submarine was intact with little visible damage. “All eight men inside were found resting at their battle stations,” she writes. “None showed any signs of skeletal trauma. None appeared to have made any attempt to escape the vessel. The narrative combines description of the author’s research into what happened after the explosion with a detailed history of events on that night in 1864, including biographies of those involved and careful examinations of the eight victims. In Hollywood, an explosion hurls the hero through the air; he brushes himself off and walks away. In reality, most bomb blasts mutilate their targets, but a sufficiently strong shock wave can produce internal injuries that kill someone on the spot. Lance delivers a lively, if often technical, description of the many experiments, models, calculations, and explosions that persuaded her and her doctoral committee that this is what happened to the Hunley.

An entertaining account of research that solved a historical mystery.