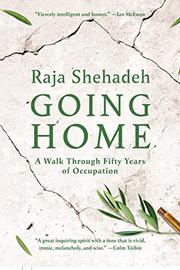 A longtime resident of Ramallah, Palestine, reflects on the city’s transformation.

Orwell Prize–winning writer, lawyer, and human rights advocate Shehadeh (Where the Line Is Drawn: A Tale of Crossings, Friendships, and Fifty Years of Occupation in Israel-Palestine, 2017, etc.) interweaves personal revelations and political history in a candid, nostalgic reflection on life in Ramallah, where he grew up and has lived for the last 50 years. Walking around his neighborhood on the 50th anniversary of Israel’s occupation of the West Bank and Gaza, he recalls a place far different from the crowded, urbanized city of today. Ramallah, he writes, “used to have the charm and atmosphere of the mountain villages of Lebanon.” Store owners would keep caged songbirds outside their shops; their gentle chirping could be heard by everyone. Now, “their song has been replaced by the noise of traffic.” Parks have given way to high-rise developments, traffic-clogged crossroads, and commercial buildings: “In the past, it did not matter that there were no designated green areas in Ramallah, situated as it was in a large natural garden of its own.” Now the city is bereft of quiet places of respite. Even more crucial, Ramallah struggles under Israeli dominance and aggression, which have fomented anger and hatred and altered the city and culture dramatically. Shehadeh worked tenaciously to get rid of the occupation, but after the first Oslo Accord, which failed to create a Palestinian state, he has felt only resignation. His human rights activism has felt futile, leaving him to adjust to a deteriorating political situation as the occupation intensified and Israeli settlements expanded. While much of the population has grown up under the occupation, the author remembers another world and regrets its loss. The occupation, he writes, “has walked with me like a shadow, stalking me, sometimes posing a challenge but more often a threat.”

A moving memoir of the far-reaching challenges of life in the Middle East.

WHERE THE LINE IS DRAWN
by Raja Shehadeh
Nonfiction

WHEN THE BIRDS STOPPED SINGING
by Raja Shehadeh
Nonfiction

STRANGERS IN THE HOUSE
by Raja Shehadeh
Newsletter sign-up