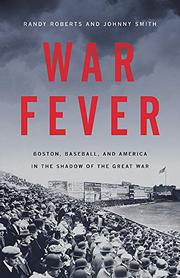 Boston, Baseball, and America in the Shadow of the Great War
by Randy Roberts & Johnny Smith
BUY NOW FROM
AMAZON
GET WEEKLY BOOK RECOMMENDATIONS:

A lively historical account of 1918 Boston, a city obsessed with baseball and defeating the Kaiser in Germany.

Roberts (History/Purdue Univ.) and Smith (History/Georgia Tech Univ.), co-authors of Blood Brothers: The Fatal Friendship Between Mohammad Ali and Malcolm X (2016), tell their story through the lives of two New Englanders—Charles Whittlesey, commander of the “lost battalion” in the Meuse-Argonne Offensive; and Karl Muck, the German conductor of the Boston Symphony Orchestra—and a Baltimore boy playing for the local team: George Herman “Babe” Ruth. As the authors write, the three “became, in 1918, the most famous war hero, war villain, and war athlete. Nearly everything they did was interpreted through the lens of the war.” Whittlesey, an idealistic lawyer, enlisted in 1917. In 1918 in France, his battalion was surrounded. For five days, without food or water and running out of ammunition, they resisted German attacks and a request to surrender until relief arrived. Oppressed by his avalanche of fame, which continued after the war with demands for speeches, parades, and favors, he vanished during a cruise in 1921, probably a suicide. The authors stress that today’s anti-Muslim prejudice pales in comparison to the nationwide anti-German hysteria that victimized the internationally acclaimed Muck. Although unashamedly German, he was no spy, terrorist, propagandist, or anti-American demagogue, accusations that poured from newspapers, women’s clubs, patriotic organizations, and elected officials. Arrested in March 1918, he was interned in a Georgia camp for 18 months and then deported. That year, Babe Ruth was pitching for the Red Sox but was already nationally famous because of his slugging. At the time, baseball was in crisis, with teams crippled by enlistments and conscription and plummeting attendance. Concealing fears of bankruptcy behind fervent patriotism, owners proclaimed that baseball provided moral uplift to war-weary Americans and salvaged a shortened season and World Series that Boston, led by Ruth, won.

An entertaining reminder that American hero worship, media hype, and fierce nationalism haven’t changed much in a century.

A SEASON IN THE SUN
by Randy Roberts
Nonfiction

A TEAM FOR AMERICA
by Randy Roberts
Nonfiction

A LINE IN THE SAND
by Randy Roberts

A SEASON IN THE SUN
by Randy Roberts
Nonfiction