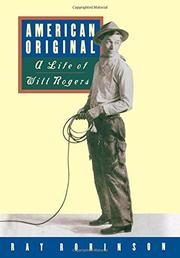 A Life of Will Rogers
by Ray Robinson
BUY NOW FROM
AMAZON
BARNES & NOBLE
GET WEEKLY BOOK RECOMMENDATIONS:

 A veteran sportswriter (Matty, 1993, etc.) goes a bit afield with still another biography of all-star entertainer Will Rogers. He was simply a natural. With his vaunted wit, Rogers (18791935) conquered stage, screen, print, airwaves--just about every available medium of communication, with the possible exception of semaphore. The genial, lariat-twirling philosopher roped in everyone from Flo Ziegfeld to FDR with sly winks and pungent topical observations. Rogers played the quintessential American (that is, himself) to perfection. Using basic pop history, starting with Hernando de Soto, the Trail of Tears, and the Civil War, Robinson quickly sketches Rogers's progenitors, some of whom would now be called Native Americans, and his progress from the Indian Territory that became Oklahoma to world traveler and national icon. We learn that Rogers, though often seasick, was a reckless air passenger (which led, of course, to the ultimate tragedy). There are extensive quotations from his unlettered and remarkably inept, unfunny letters of courtship and a gathering of opinion from fellow actors. Withal, the text too often seems to be an amalgam of random recollections, a few odd facts, and secondary source material. There is little new and revealing about the man that urgently demands another biography after Ben Yagoda's masterful 1993 work. Clearly, Rogers was usually a man of remarkable native intelligence and wit. What caused him, then, to offer words in support of Huey Long, Benito Mussolini, and Father Coughlin? Robinson doesn't enlighten us; the most natural and open of performers remains an enigma as a man. Appended are several pages of Rogers's gags, but no index, filmography, bibliography, or notes. A serviceable account of a famous American, but not a prime example of the biographers' art. (30 b&w photos, not seen)