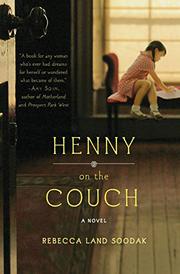 HENNY ON THE COUCH

Soodak’s first novel, about an affluent New York mom and her rocky relationship with her own mother, considers several mother-daughter parallels.

Kara, born out of wedlock to a talented songstress and a brilliant composer, found life with her mother difficult. Her mom was both gorgeous and boozy, and treated her more like a girlfriend than daughter. Kara ached to leave her small town in Ohio behind and migrated to New York City, which held the key to everything she wanted in life. Of course, the thing she wanted most of all was Oliver, a rising young star in the art world; but a lasting relationship with Oliver wasn’t possible, and Kara soon finds herself recast as a mother, wife and businesswoman. Told partially in flashbacks that take Kara back to her childhood with her temperamental mother and her college days with the careless and sometimes emotionally cruel Oliver, the book opens with Kara finding the now-famous Oliver’s paintings exhibited in a nearby gallery. Married to a successful businessman, Michael, and the mother of three, Kara partners in a children’s hair salon, employs a nanny who lives in the couple’s small studio apartment next door to their place and befriends novelist Morgan, who cheats on her husband with a stranger. While Kara explores her mother issues and deals with nanny problems from her perch high in an expensive building, she gradually becomes aware that her daughter, Henny, is having problems at school. Set against the backdrop of the Big Apple, which Kara clearly loves, the book examines Kara’s life of pedicures, lattes and play dates in writing that flows. In the end, though, the most interesting parts of the book aren’t set in Kara’s present, in which she comes off as shallow and self-indulgent, but in her past, dealing with her drunken mother and crush on a man who was, at best, self-serving.

Although Soodak’s portrait of a privileged upper-class New York mom rings true, once Kara crosses from college student to frazzled yuppie she ceases to be interesting and sympathetic.