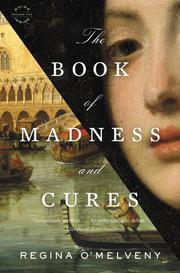 THE BOOK OF MADNESS AND CURES

Poet O’Melveny’s darkly whimsical first novel follows a 16th-century Venetian doctor as she travels across Europe in search of her father.

Gabriella’s physician father taught her his craft, and they practiced medicine together before he left Gabriella and her depressed, paranoid mother 10 years earlier, supposedly to gather material for his great project, The Book of Diseases. He has written letters over the years, but their frequency has dwindled; now, in 1590, he writes that he will not be returning. As a female doctor, she has been restricted to treating only women, but now the Guild of Physicians denies 30-year-old Gabriella her right to practice medicine at all. So with her loyal maidservant Olmina and Olmina’s trusted husband Lorenzo, Gabriella bids a testy farewell to her harridan of a mother and departs Venetia in search of her father. She brings her medicine trunk, her father’s letters and the pages from her father’s book about mysterious ailments like solar madness and the malady of mirrors. She visits Padua, where her father’s friend hints at her father’s tendency toward madness. She passes as a man through villages in Bavaria, where most of the women have recently been burned as witches. She steals back some of her father’s papers from a Bavarian professor. In Scotland she meets Hamish, a doctor who knew her father. He arranges for her to treat some patients, although for all the talk of medicine Gabriella is never shown doing much actual healing. She and Hamish are drawn to each other, although their romance may strike readers as lukewarm. Unaware that she is pregnant, she leaves without telling him, but he stalwartly follows her to Tangier until her search ends. Along the way Gabriella becomes less sure of the boundary between devotion and obsession. She faces dangers both from nature and men. There are deaths. There is sex. But mostly there is pretentious talk.