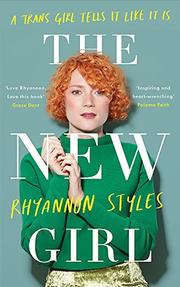 A Trans Girl Tells It Like It Is
by Rhyannon Styles
BUY NOW FROM
AMAZON
BARNES & NOBLE
LOCAL BOOKSELLER
GET WEEKLY BOOK RECOMMENDATIONS:

Styles, who began transitioning from male to female at age 30 in 2012, looks back over the path of her life from childhood up to the present.

In her first book, the British author, who was the transgender columnist for Elle U.K. from 2015 to 2017, reaches out to readers who wonder about the often awkward and confusing process of transitioning. She begins with memories of growing up in rural England in the 1980s, often switching “between the roles of girl and boy in my head, unsure of which one felt more secure.” Young Ryan—who changed his name to Rhyannon when he began transitioning—liked to dress in girls' clothes and wear makeup and felt at home with the girls in his primary school. Bullied as an early teen, he found a home later in adolescence with other teens involved in art and music and then went on to London to study jewelry making in art school. For a while, the author satisfied his desire to dress as a woman by performing in drag shows. Eventually, however, he wanted a more permanent and less showy change, so he began to communicate with his family, whom he had previously kept in the dark about his gender identity. Though generally upbeat, Styles also reveals a more tormented side in a chapter called “The B-Side,” which details long periods of depression and drug and alcohol abuse, eventually abated through 12-step programs. She describes in cheerful detail the process of transitioning, including the effects of hormones on her body and personality, both positive and negative, and she details her present state of indecision about just how far to go with transition. Her acceptance of a fluid identity should be comforting for readers who feel out of place in a cultural system that divides gender into traditional male and female roles.

An honest and helpfully specific journey through a life that has taken some unexpected turns, of interest to all open-minded readers and especially to transgender individuals and those who care about them.

BEYOND MAGENTA
by Susan Kuklin
Nonfiction