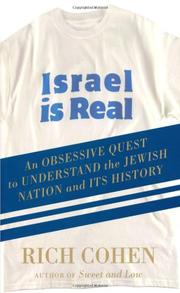 An accessible primer on a complex nation and its faith.

Many of the facts about Israel are well-known. It’s a Jewish state in the middle of an Islamic region of the world; its enemies question its right to exist; many European Jews have emigrated there in the decades following World War II; and its status in relation to Palestine and the rest of the region is complicated, controversial and often violent. Rolling Stone contributing editor Cohen (Sweet and Low: A Family Story, 2006, etc.) takes a long, idiosyncratic view, explaining the history of a people and its religion from the time Zealots revolted against their Roman occupiers to the rise of the Zionists, who helped build the current republic. “If this book is working the way it’s supposed to,” writes Cohen, “then each individual story will read like the history of Israel, and the history of Israel will read like the life of a single man.” Along the way, the author brilliantly illustrates how Israel, once among the most powerful nations in the world, would likely have been destroyed if not for the efforts of a few forward-looking rabbis. While the smoke still rose from the remains of the Second Temple in Jerusalem, the nation was transformed into an idea, which gave way to a centuries-long diaspora. Cohen soars as a storyteller, using a captivating cast of characters—including Josephus, the traitorous first-century historian; Theodor Herzl, the slightly crazed Zionist visionary; Ariel Sharon, the soldier and statesmen—to explain the mishmash of politics, ideology and psychology that have gone into the reification of Israel. Now, writes the author, Israel is under threat of destruction once again.

A must-read for those who want to understand the context of the modern Jewish state.

THE LAST PIRATE OF NEW YORK
by Rich Cohen
Nonfiction

THE AVENGERS
by Rich Cohen