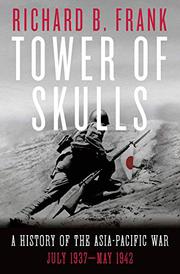 A History of the Asia-Pacific War, Volume I: July 1937-May 1942
by Richard B. Frank
BUY NOW FROM
AMAZON
BARNES & NOBLE
LOCAL BOOKSELLER
GET WEEKLY BOOK RECOMMENDATIONS:

The first of a three-volume definitive history of the Asia-Pacific War.

As distinguished World War II scholar Frank (MacArthur, 2007, etc.), who served as a platoon leader in the Vietnam War, writes, after Japan conquered nearby Manchuria in 1931, local Japanese forces invaded China proper in 1937. “This volume,” writes the author, “attempts to restore the notion of a ‘Heroic China’ carrying on in the face of Japanese aggression, with horrific levels of death and destruction and with very sparse international support….The possibility that China could hold out in a conflict with Japan for more than weeks, or at most months, was wholly discounted throughout the world in 1937.” In the first half of this monumentally researched narrative, Frank recounts the war in China, where more fighting and deaths occurred than on all other fronts combined. Readers may be startled to learn that historical opinion of China’s leader Chiang Kai-shek has vastly improved. Frank agrees, maintaining that Chiang’s stubbornness and acumen converted the Japanese invasion into a quagmire, “a struggle that would prove ultimately fatal to Imperial Japan.” In 1941, galvanized by Hitler’s invasion of Russia and embargoed by America, Japan's army leaders yearned to invade Siberia, and the navy leadership sought to conquer resource-rich Southeast Asia, which risked war with the U.S. The morass in China probably tipped the balance. After an absorbing account of the planning and maddening negotiation that preceded the attack on Pearl Harbor, Frank enters familiar territory with gripping descriptions of the attack followed by Japan’s dazzling conquests from the South Pacific through the Philippines, East Indies, Singapore, and Burma. Readers may be surprised by the fact that Japanese troops were usually outnumbered (more than 2-to-1 in the Philippines) but better led. Frank’s sharp portraits of the Allied generals include the usual incompetent suspects (e.g., Arthur Percival in Singapore) but also two who emerged as heroes (Douglas MacArthur and Joseph Stilwell).

A painful yet riveting history, especially valuable for historians and military buffs.