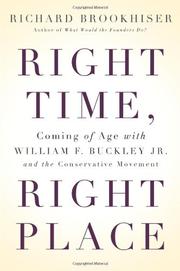 No history of the modern conservative movement would be complete without a healthy chapter on William F. Buckley’s opinion magazine, National Review, founded in 1955. Brookhiser’s adolescence coincided perfectly with that of the magazine—in 1970, at the remarkable age of 14, he published his first article there. The author arrived early enough on the NR scene to absorb the in-house lore surrounding the likes of Whittaker Chambers, James Burnham, Russell Kirk, Garry Wills and other contributors. Rising quickly from summer intern to writer, managing editor and, at 23, senior editor, Brookhiser was tapped to succeed Buckley as editor-in-chief. The author was stunned to have the offer unexpectedly withdrawn a few years later. Baffled and resentful, he embarked on a new career as a freelancer and historian, never severing his ties to the magazine or to Buckley. He enjoyed the steady paycheck, of course, but as this memoir makes clear, life at NR was just too interesting and too much fun. Brookhiser’s wonderfully conversational, occasionally confessional, frequently witty account contains numerous stories about the magazine’s daily operations and its rise from the political margins to the white-hot center of the Reagan Revolution. Sprinkled throughout are amusing snapshots of the startling array of talent—Paul Gigot, George Will and Terry Teachout, among many others—who passed through its doors. More than anything, though, Brookhiser reflects on his maturation as a thinker, writer and a man who for too long measured his worth against the glittering Buckley, his spiritual father, inspiration, boss and friend. Old enough now to appreciate the misunderstandings on both sides, chastened by a bout with cancer and distinguished in his own right as a historian, Brookhiser’s eyes-wide-open appraisal of his mentor is deeply affectionate.

GIVE ME LIBERTY
by Richard Brookhiser
Nonfiction

THE CORROSION OF CONSERVATISM
by Max Boot
Newsletter sign-up