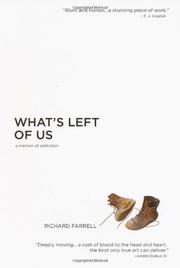 WHAT’S LEFT OF US

Grim, unpleasant memoir of a junkie in a depressed New England city.

Filmmaker and journalist Farrell (co-author: A Criminal and an Irishmen: The Inside Story of the Mob-IRA Connection, 2006) writes unsparingly of the lowest point in his life, a week of state-imposed rehab as a result of a failed attempt to overdose on his drug of choice, heroin. In an afterword, the author notes that he wrote this book in response to James Frey’s A Million Little Pieces (“it is a damn shame Frey had the balls to lie about something that important to all of us in recovery”). In contrast to Frey’s exaggerated self-portrait as a tough guy who could finally stare down a shot of booze, Farrell says that his vastly less glamorous story is more faithful to the truth about recovery—and it’s not pretty. Acknowledging the unreliability of memory and admitting to some legally and ethically necessary name and fact changes, Farrell describes his method as trying to recover truth as though it were happening in front of him. The story is told in present tense—Lowell, Mass., in the late ’80s. Born with a form of cerebral palsy, he was brutally molded into a high-school football star by his Notre Dame–crazy father, but a knee injury, he says, got him addicted to painkillers and then heroin. Farrell paints a decidedly unflattering self-portrait. He was a liar, thief, bum, arsonist and a rebel whose only cause was staying high. He was also the mostly absent father of two small children, an estranged husband and a mooching son of a devoted mother. His time in rehab was like a low-rent One Flew Over the Cuckoo’s Nest, shared with similar outcasts and misfits under the watchful eyes of untrusting wards. Though the book is powerfully, even entertainingly, written, reading it is about as pleasurable as a week in rehab must be—which may be Farrell’s point. But the author doesn’t fully address how he was able to elevate himself enough to write this memoir.

Not for everyone—probably best savored by addiction counselors and people in recovery.