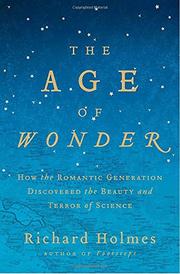 THE AGE OF WONDER

Energetic analysis of the “Romantic Age of Science.”

Romanticism, the deeply emotional artistic movement of the second half of the 18th century, was partly a reaction against the pragmatism of Enlightenment scientists. However, British historian Holmes (Sidetracks: Explorations of a Romantic Biographer, 2000, etc.) writes, the divide between scientific endeavors and artistic pursuits was not always so clearly delineated. The author focuses primarily on the lives of two men who straddled both worlds, who embraced “Romantic science” and pursued it with the passion of poets or painters. Astronomer William Herschel, who discovered the planet Uranus in 1781, started his career as a musician. That led to an interest in mathematics and then astronomy, which he pursued with the same emotional fervor as any classical music piece. He even compared his skill at seeing astronomical phenomena with the skill required to play Handel’s fugues. Holmes also looks at the British chemist Humphry Davy, who, among other accomplishments, discovered that chlorine and iodine were elements. Early on, Davy wrote poetry, and later became friends with Samuel Taylor Coleridge. One of his poems celebrated “science, whose delicious water flows / From Nature’s bosom.” Davy’s enthusiasm led to risky, self-destructive behavior—he often inhaled strange chemical gases as experiments, a practice that nearly killed him. While partaking of nitrous oxide with acquaintances, he extolled the glories of science: “I dream of Science restoring to Nature what Luxury, what Civilization have stolen from her—pure hearts, the forms of angels, bosoms beautiful, and panting with Joy & Hope.” Davy may have had a brilliant scientist’s brain, but he had the heart and soul of a poet. How these two contradictory ideas not only coexisted, but flourished together during the Romantic era, makes for engrossing reading.

Enjoyable excavation of a time when science and art fed off each other, to the benefit of both communities.

IN THE FOOTSTEPS OF CHURCHILL
by Richard Holmes
Nonfiction

THE FALL OF THE HOUSE OF WILDE
by Emer O'Sullivan
Nonfiction