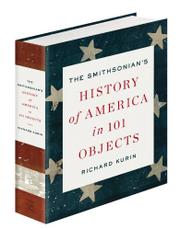 THE SMITHSONIAN'S HISTORY OF AMERICA IN 101 OBJECTS

An overstuffed exploration of American history as related through material artifacts, from Meriwether Lewis’ compass to relics of the Space Age.

The “history of X in Y objects” trope, launched by Neil MacGregor’s History of the World in 100 Objects a few years ago, is already in danger of becoming a cliché. Indisputably, though, if you wanted to learn about American history through material holdings, the Smithsonian would be the place to start and end, just as the British Museum served as the trove of first and last resort for MacGregor. Smithsonian Undersecretary Kurin’s (Madcap May: Mistress of Myth, Men, and Hope, 2012, etc.) tales are abundant, so much so that it seems almost a shame to stop at a mere 101 items, fat though this book is. For instance, who knew that the original Stars and Stripes, the flag that flew over Fort McHenry during the War of 1812, was packed off to shelter in the Shenandoah Valley of Virginia during World War II because Franklin Roosevelt “feared Germany might bomb the National Mall”? Beginning 500 million years ago, Kurin celebrates the Burgess Shale fossils, which gave Stephen Jay Gould material evidence for his evolutionary theory of punctuated equilibrium; then writes of the bald eagle, “adopted as a national symbol…for its connotations of indomitable force”; and then turns to Clovis points, the tools that early Indian hunters used to bring down mammoths, bison and perhaps even an eagle or two. Rocketing through hundreds of years by way of a Colt revolver, the lyrics to “This Land Is Your Land” and Sitting Bull’s sketchbook (again, who knew?), Kurin closes with some of the tools of our time, from Chuck Berry’s guitar to the first Apple computer and on to galaxies far beyond our own.

A well-conceived and well-illustrated pleasure to read, combining narrative history and keepsake volume.

THE CIVIL WAR IN 50 OBJECTS
by Harold Holzer
Nonfiction

HOW THE STATES GOT THEIR SHAPES TOO
by Mark Stein
Nonfiction

THE NATURALIST
by Darrin Lunde
Nonfiction