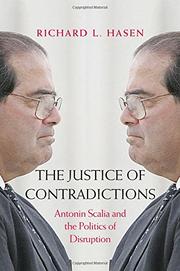 THE JUSTICE OF CONTRADICTIONS

An influential legal commentator grapples with the jurisprudential legacy of Antonin Scalia (1936-2016).

During his lengthy tenure on the Supreme Court, Scalia promoted two approaches to interpreting statutes and the Constitution, textualism and originalism, with the aim of limiting what he saw as unprincipled judicial activism through the use of more objective analytical methods. Hasen (Law and Political Science/Univ. of California, Irvine; Plutocrats United: Campaign Money, the Supreme Court, and the Distortion of American Elections, 2016, etc.) argues that while Scalia was very successful in promoting both approaches in courts and law schools, neither provide the benefits Scalia claimed for them and Scalia himself was inconsistent in their use. "Scalia tried to have it both ways,” writes the author, “by describing himself as bound by strong neutral principles, and then bending those principles to adhere to other principles, such as ideology or respect for precedent." Hasen effectively supports his critique with incisive analysis of pertinent cases and legal commentary, clearly explaining the fundamental theoretical and practical weaknesses of these methodologies. While Scalia could be charming in person, his legal writing was notorious for an overbearing and sarcastic attitude, especially in dissent. His slashing prose style certainly called attention to his views, but Hasen contends that by attacking other justices personally and questioning their intelligence and motivations, he contributed to a coarsening of legal discourse and unnecessarily "took aim at the legitimacy of the Supreme Court's decisionmaking," all to the court's detriment. In later chapters, the author addresses Scalia's approach to cases involving such politically controversial topics as affirmative action and campaign financing, and here his arguments are on shakier ground. Hasen seems to disapprove of the jurisprudence of this conservative justice on largely ideological grounds, and his discussion of these topics frequently swerves from careful analysis to partisan advocacy.

Recommended particularly for attorneys and other legal professionals who can appreciate, analyze, and critique the author's viewpoint for themselves.