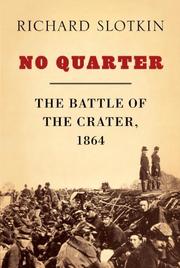 The Battle of the Crater, 1864
by Richard Slotkin
BUY NOW FROM
AMAZON
BARNES & NOBLE
LOCAL BOOKSELLER
GET WEEKLY BOOK RECOMMENDATIONS:

The offbeat history of a truly explosive Civil War battle.

Historian Slotkin (Lost Battalions: The Great War and the Crisis of American Nationality, 2005, etc.) focuses on a particularly unusual battle, which occurred July 30, 1864. Ulysses S. Grant and his Union forces were determined to seize Petersburg, Va., a heavily fortified, key supply point for the Confederate capital of Richmond, but his soldiers were bogged down in trench warfare against Robert E. Lee’s Confederates. To break the stalemate, Henry Pleasants, a Union lieutenant colonel and former mining engineer, proposed that Union soldiers dig a tunnel underneath one of the Confederate forts, pack it with explosives and blow a hole in the Confederate line. Major General Ambrose Burnside supported the plan, but others, including Grant, were less enthusiastic. Consequently, the soldiers tasked with the digging were supplied with inferior equipment and supplies. Nonetheless, the tunnel was completed in a month and packed with 8,000 pounds of gunpowder. A regiment of African-American soldiers had been trained to lead the post-explosion charge, but were replaced at the last minute with an inexperienced white regiment. The blast—the largest manmade explosion to that point—opened a crater, still visible today, more than 130-feet wide and 30-feet deep. Many Union troops marched into the crater instead of around it and were shot in massive numbers. Ultimately, Grant deemed the Battle of the Crater “a stupendous failure.” Some 3,800 Union troops were killed, wounded or captured, compared to fewer than 1,500 Confederates. Burnside was relieved of command, and the seemingly endless trench warfare continued as before. Slotkin skillfully portrays the myriad political and strategic elements in play throughout the preparation of the ill-fated siege, as well as the sometimes prickly personalities of the commanders in charge. He’s particularly adept at describing the unbridled chaos and brutality, hour by hour, of the battle itself.

THE LONG ROAD TO ANTIETAM
by Richard Slotkin
Nonfiction