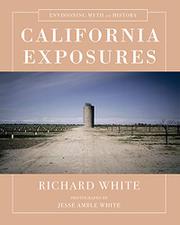 Masterful explorations of the Golden State by a leading historian of the American West.

White (American History/Stanford Univ.; The Republic for Which It Stands: The United States During Reconstruction and the Gilded Age, 1865-1896, 2017, etc.) teams with his photographer son, Jesse, in a fruitful, highly illuminating collaboration born of a dare to shape a historical text out of an assemblage of images. The result is, the author admits, incomplete: The story of Watts is absent, that of Silicon Valley hinted at, and “the state’s frequently peculiar politics sometimes enter the story, but more often do not.” Nonetheless, White dismantles and builds at the same time, interrogating the well-worn story of Sir Francis Drake’s landing at Point Reyes and complicating the subsequent enshrinement by Episcopalian monument builders with the fact that their hero was a pirate, which “made the celebration of his religious faith incongruous.” The author returns to Point Reyes to recount the working-class immigrants who made a living there, a narrative of Japanese and Italian households that picnicked together but were subjected to different fates when World War II arrived; that narrative is braced by historical photographs and Jesse’s sweeping landscapes. White’s principal interest lies precisely with those working people who made California, among them the Native peoples who labored in the irrigated orchards and vegetable beds outside the main mission compound at San Fernando: “Gardens were for contemplation and relaxation; in the huertas, people worked.” At Point Reyes again, he examines the lives of the men, women, and children at the “alphabet ranches” (named D Ranch, F Ranch, and so on) who worked as tenants in places where the ranchers hoped “that good years would outnumber bad.” Sometimes they were right, a fact that has kept people coming to California in endless numbers for generations. White gives them voice, writing thoughtfully of the many cultures and ethnicities that have contributed to building the state.

Necessary reading for students of California history and a model for place-based historical studies to come.

THE REPUBLIC FOR WHICH IT STANDS
by Richard White
Nonfiction