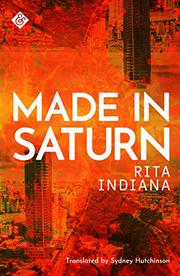 Singer/songwriter Justin Townes Earle, a recovering drug addict, tells audiences that people ask the wrong question of those trying to get clean. Rather than asking why they use, they should ask why they hurt.

This sentiment runs through Indiana’s fifth novel. In it, Argenis Luna has been sent to a Cuban drug detoxification clinic run by Dr. Bengoa. The arrangement took some string pulling from Argenis’ father, a high-ranking bureaucrat in the Dominican Republic’s ruling party, who called in a favor from the physician. The two had once been political comrades, forging a bond during a 1967 Latin American Solidarity Conference. At the time, both were filled with revolutionary fervor. Now, 37 years later, the men are middle-aged and weary. José Alfredo, the dad, has become rich and powerful, and Bengoa has become a hack physician, providing rich junkies with injections of Temgesic to wean them from heroin. José Alfredo, meanwhile, wants to help his 27-year-old son, a once-promising artist, get his life back on course. But it won’t be easy. Argenis hates his negligent and philandering father and is filled with contempt for him. At the same time, he’s grateful to be in Havana, especially after meeting comely Susana. Recovery, however, is never seamless, and as memories of childhood flood back, Argenis has to confront both the love and deprivation that marked his coming-of-age. Along the way, he is aided by people who include a Cuban drag performer, his aunt Niurka, his mom, Etelvina, and a former art professor. Still, despite their considerable assistance, Argenis remains haunted by the image of Goya’s Saturn Devouring His Son. Will he, like the son in the painting, find rescue, or will he be consumed by an overbearing father?