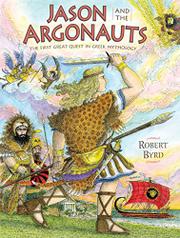 JASON AND THE ARGONAUTS

Like most Greek myths, Jason’s journey to complete a near-impossible task unfolds through an episodic plot in which the gods interfere with the mortals constantly—for good or ill. When Jason’s evil uncle, Pelias, usurps the throne of his father, Aeson, king of Iolcus, Jason’s mother wisely sends him to the forest to be raised by Chiron the centaur. Upon Jason’s return to Iolcus to defeat Pelias, Hera, wife of Zeus, appears to him and promises her guidance and protection, which she delivers throughout his journey. Pelias refuses to relinquish the throne unless Jason brings him the Golden Fleece (the background story of which Byrd also includes in this volume). Jason then gathers the finest Greek men, commissions the Argo, and embarks upon a journey with colossal challenges. Byrd eases navigation of this text-heavy picture book by illustrating the unimaginable, such as bronze-beaked Stymphalian birds with dart-shooting feathers and Scylla, part hag, part fish, with six fanged dog’s heads protruding from her torso. Each double-page spread constitutes a chapter, making for good-sized chunks for episodic read-alouds. Sidebars give brief background on characters, the backmatter introduces the Olympians, and front and back endpapers show maps of Jason’s route.

A fine first introduction to an age-old tale of travel, adventure, and heroism. (Mythology. 6-9)

AFRICA IS MY HOME
by Monica Edinger
Children