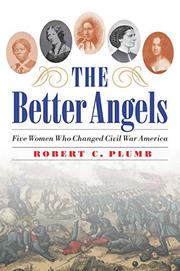 Portraits of five women who leaped into action during the Civil War—and whose contributions have proven essential and lasting.

Writer and marketing consultant Plumb (Your Brother in Arms: A Union Soldier’s Odyssey, 2011) chronicles the Civil War contributions of five women who moved into active roles that men had normally filled. A young Clara Barton, a teacher from North Oxford, Massachusetts, who had been working as a clerk in the U.S. Patent Office in Washington, D.C., was horrified by the conditions of the military camps around the city and was motivated to begin a campaign to mobilize supplies for them. Her tireless efforts and advocacy eventually led to the establishment of the American Red Cross. Harriet Tubman, having made her way to freedom before the war along the Underground Railroad from Maryland to upstate New York, along with her family, became an active nurse and scout for the troops in South Carolina, operating behind enemy lines. She was known as “Moses of her people” and “General Tubman” for her work on behalf of black refugees, though she was never properly acknowledged or compensated by the military. Harriet Beecher Stowe, an ardent abolitionist, was outraged by the alarming national developments of the Compromise of 1850 and the Fugitive Slave Act and wrote the hugely influential Uncle Tom’s Cabin in a righteous fury. Despite a suffocating marriage, Julia Ward Howe made a literary name for herself, spurred by the spectacle of troops marching to write the war’s anthem, “Battle Hymn of the Republic,” in 1861. Sarah Josepha Hale, editor of the popular women’s magazine Godey’s Lady’s Book, had been tenaciously advocating for a national Thanksgiving Day, though it was ultimately President Abraham Lincoln who proclaimed the day on Nov. 26, 1863. In addition to his straightforward biographies, the author also looks at the women’s postwar years and offers extracts from their writings.

An inspirational work of history that touts such character traits as persistence, courage, faith, and compassion.