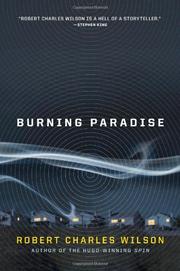 The world Cassie Iverson of Buffalo inhabits has been peaceful since the Great Armistice of 1914. As a result, social welfare has advanced, technology has lagged and computing is primitive. Cassie, however, is a member of the Correspondence Society which, years ago, discovered that the atmosphere’s radio-reflective layer is actually a living entity, a cellular hypercolony that mimics intelligence through sheer computational power. And through its human agents, or sims, who look normal but have no individual awareness and bleed green goo, it controls human progress. In 2007, sims murdered Cassie’s parents and other leading Society members; the rest scattered and went into hiding. She lives now with her aunt Nerissa and younger brother Thomas. One night when Nerissa is out, she sees a sim watching the house—a sim that dies in a traffic accident crossing the road, leaking green goo—and immediately flees with Thomas to Leo Beck, another Society member who lives nearby. Together, they formulate a desperate plan to locate Leo’s rich father, Werner, who has long nurtured plans to destroy the hypercolony. Meanwhile, in rural Vermont, another sim visits Cassie’s reclusive uncle Ethan—but this sim says it wants to talk. When Nerissa shows up, they disable the sim and interrogate it. It says it isn’t part of the hypercolony but another, parasitical, entity—and it says it wants their help. This dazzling, complex and typically weird backdrop, augmented by nifty, character-driven plotting and action, leaves no doubt that it’s all scarily real. However, later revelations tend to undermine all this excellent work, leaving a final third that doesn’t convincingly add up.

Regulars know where Wilson is coming from and probably won’t mind, but it’s impossible to avoid just a tinge of disappointment.