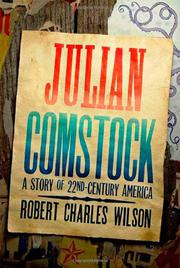 A century from now, following a total collapse of the social order, the reborn American administration resides in New York City. The 60 states have reintroduced slavery, in the form of indentured labor; the Church of the Dominion in Colorado Springs exercises supreme religious power; technology is Victorian; in Labrador, the Army struggles to contain Dutch invaders. The hereditary President, Deklan Comstock, executed his brother Bryce for treason and sent Bryce's son Julian for safekeeping to the town of Williams Ford in the province of Athabaska. Julian's constant companion is narrator Adam Hazzard, a naïve but educated commoner who, along with warrior-scholar Sam Godwin, attempts to smooth over Julian's outspoken remarks, particularly on the taboo subjects of religion and politics. Still, only Julian's aristocratic heritage keeps him out of trouble—until the army arrives, intent on conscripting all able-bodied males for the war effort. Julian, unwilling to trade on his name and eager to remain with his companions, calls himself Commongold. In the army, he continues to preach against the Dominion and for the works of the Secular Ancients, while winning renown for his bravery and receiving a battlefield commission. Sooner or later, though, he will be obliged to return to New York, where his identity can no longer be hidden from the president.

Expertly handled prognostication with more than a touch of somber magnificence.