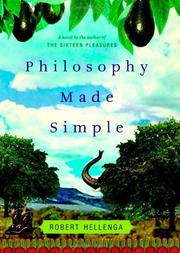 In Hellenga’s vibrant fourth novel, a retired widower embarks on a semi-philosophical quest that yields an avocado grove, an elephant and a new love.

Sixty-year-old Rudy Harrington has been selling avocados in Chicago all his life. His beloved wife Helen is dead, elder daughters Meg and Molly live in other cities and now his youngest, Margot (first encountered in Hellenga’s debut, The Sixteen Pleasures, 1994), has left for Italy. Should Rudy hit the road too? There’s an avocado grove in Texas up for sale. He’s been reading a book by the uncle of TJ, Molly’s Indian boyfriend (yes, it’s called Philosophy Made Simple). Might he find Aristotle’s “supreme good” in Texas? Rudy decides to give it a shot. Though he soon realizes that raising avocados will not make him any wiser than selling them did, his new home near the Rio Grande has its appeal. There’s an elegant bordello just across the border. His neighbors include an Indian pandit who has magically rid the town of its crows and a Russian whose elephant, Norma Jean, paints four abstract canvases a day. All three daughters eventually show up, but it’s the artistic elephant who steals the show. When Rudy has a heart attack, Norma Jean saves his life. After the Russian absconds, Rudy becomes her new owner. Norma Jean is not just physically imposing, she’s also the spiritual representative of Lord Ganesh, the elephant god. Could she be the Kantian “thing in itself”? That’s the belief of TJ’s mother, Nandini, who’s flown in for the couple’s Indian marriage ceremony. But bad karma threatens the wedding. Norma Jean is struck by lightning, such an evil omen that the pandit refuses to officiate. TJ is in shock after some revelations by Molly. Rudy, who to his astonishment has fallen in love with Nandini, must save the day.

There’s nothing whimsical about this solidly grounded fiction, which enchantingly explores the space between philosophical concepts and our hapless floundering in life’s challenges.

THE CONFESSIONS OF FRANCES GODWIN
by Robert Hellenga
Fiction

THE FALL OF A SPARROW
by Robert Hellenga

ON TRUTH
by Simon Blackburn
Nonfiction

PLATO AT THE GOOGLEPLEX
by Rebecca Newberger Goldstein
Indie