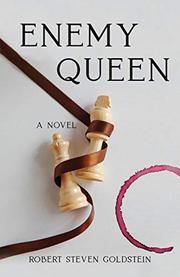 Two roommates—an attorney and a professor—share a young woman sexually, a sordid arrangement that turns dangerous in this novel.

Stanley Berman and Thomas McClellan both work at North Carolina University—the former as its head attorney and the latter as a professor of creative writing in the English department. They’re also roommates joined by a profound but lighthearted sense of camaraderie—they spend their days drinking fine wine, playing chess, and gamely arguing “like an old married couple.” Both are romantically unattached—in fact, Stanley is twice divorced, and Thomas thrice. Sexually frustrated, Thomas concocts a peculiar plan, a way to consummate their friendship heterosexually, not platonically. He’ll find them a “go-between,” a young woman they can both bed and, by some incestuous transitivity, sleep “with each other through her.” Ideally, she would move in and keep house, too. Astonishingly, Thomas finds someone: Victoria Templeton, a beautiful, vivacious young woman who aspires to be a “lady writer.” She audits Thomas’ writing class and quickly becomes embroiled in a bizarre sex triangle with the two men, the increasingly inventive choreography of which is amusingly described by Goldstein (The Swami Deheftner, 2013). But their arrangement starts to sour when the two friends both tire of her quirks and then become frightened by her domineering narcissism. She compels them to wear “chastity devices” to prevent them from masturbating. Deciding she’s “deranged,” they plot to get rid of her but anxiously worry how she’ll respond, especially after she issues a thinly veiled threat: “If people found out that a tenured professor and the university counsel were doing this kind of threesome with a young woman, don’t you think they’d find it inappropriate?” The author’s humor is as deliciously subversive as Thomas considers himself to be—raunchily funny and psychologically daring. In addition, the relationship between the two protagonists—despite the boundaries it luridly transgresses—is brilliantly wholesome, even touching. Each paragraph of the story is as unpredictably peculiar as the next—the plot is a tantalizingly original puzzle, dramatically gripping, erotically electric, and satisfyingly weird.

A hilarious dark comedy that explores the nature of friendship through the lens of sexual licentiousness.